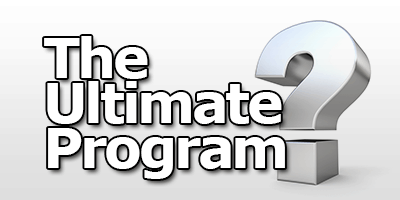 The Ultimate Program is a huge stash of my most savage MMA techniques.

5.00 out of 5
(2 customer reviews)
Categories: All Products, Training Courses

The Ultimate Program is a collection of the most vicious techniques, brutal set-ups, and the most powerful submission moves that I’ve learned in my career as a professional fighter.

FYI this program is usually only available in the All Access Pass.

If you master even a fraction of the techniques in this course, you will have the tools necessary to beat fighters of any level… and street fights should be a breeze.

The best way to tell you about this program is to tell you a little about my painful life just before I started filming this thing.  I had been fighting professionally in low-level, crappy cage matches for a few years, and while I was a “professional fighter”, I was barely making enough cash to pay for the medical bills that accrue in the sport.  To fill in the financial gaps, I ran a full time private MMA studio.  I would teach kickboxing and MMA to average Joes for 6 or 7 hours every day.  Then I’d bang heads with my real training partners and clean up just in time to be an angry bouncer in Philadelphia.

I was not pleasant to be around.

I was way over worked, and over trained.  I lived in a constant state of being “burnt out”, but in my youthful ignorance, still found a way to push through the pain.  My hands shook too violently to read a Maxim while trying to crap every morning, I was plagued with nagging injuries from lack of recovery, and I existed in a state of brain-fog from getting hit in the head so much.

Somehow, it was still awesome in a life shaping way.

I was mastering piles of devastating MMA technique and as an added benefit, I was becoming an effective teacher.   My students were developing rapidly and overcoming obstacles in their lives.  This was my “sensei training”… I was banging heads in cages, and then  painfully passing along all of my knowledge to anyone who wanted to learn.

I lived this life for 8 years…

Nostalgia certainly has a way of making the past seem a lot cooler than it really was.  This was the most challenging chapter in my life, and I began to long for a life where I could do things like eat soup without shaking it off of my spoon.

One day I turned to my training partner Tom Gallechio and said, “Hey Tom, let’s make a video for every single move we’ve ever learned.  Let’s document every single morsel of powerful MMA knowledge that we have… thus giving EVERYONE the chance to learn from our life quests!  Let’s create a system of fighting so unbelievably powerful that we actually reinvent the way that MMA training is approached!!!”

Tom, thoughtfully nodded in agreement, and then literally broke my face with an elbow while training minutes later.  I tried to blow my nose, and the right side of my face inflated… so we couldn’t really start filming until the water balloon sized air pocket in my face went away.  It was a rough start.

Then we proceeded to make epically crappy videos for the next 3 years.

It was a disaster.  We would film for hours only to find that the microphones weren’t on.  When they were on, they would be overrun with static.  Memory cards would run out mid-clip, and we wouldn’t notice… wasting hours as we talked to ourselves.  Our lighting was terrible, my delivery was packed with stutters and stammers, and we just really really sucked making video.  BUT we were documenting our martial legacies, and it felt pretty darn good to do it.

After a few years of stockpiling solid techniques with crappy production value… we had tons of videos.   I put 50 or so on the website for free and the other 130 or so were hidden in the “Ultimate Program”.   After years of work on this fantastically well rounded MMA program, my stupid video on Head Movement went viral, and that’s all anyone wanted to learn.  People don’t want to study “MMA”… they just want to be f***ing ninjas.

The Ultimate Program was cast aside… and after all of that work, I pulled it from the shelf of my digital shop.

You might be wondering why I stopped selling the Ultimate Program…

After a few years of doing anything “creative”, your style will evolve.  For example, musicians go through drastic changes in the style of music that they make and appreciate.  Gwen Stefani turned from a punk rocker to a pop-star… art just evolves.

I felt the same thing happen in my “art” of making how-to-fight videos.  As I got better and better, I couldn’t even stand watching my old video.  They were just shitty to me.  The moves are great, but something about watching my old work is just painful for me.

Due to my own weird and relentless pursuit of perfection, I shelved literally YEARS of hard work, simply because I have thought to myself… “I can do better.”

At this point, the Ultimate Program has become “Vintage” to me… it’s like a rare and well aged wine.

This course now reminds me of an epic time in my life.  In the midst of being burnt out, and beat down, Tom and I managed to rise against the odds in the pursuit of a dream.   We just wanted to share our knowledge with the whole world, instead of one student at a time.  There were no guarantees that we’d ever make a cent off of this stuff and still we pushed through… surviving failure after failure… overcoming every feasible adversity.

After all this time and hard work, my vision has become a reality.  People from all over the world change their lives by empowering themselves with the techniques I teach.  All it takes is a little hard work, and a little perseverance.

In tribute to this time in my life, I am re-releasing the Ultimate Program, as part of the “All Access Pass” product.  Anyone who wants to train every epic technique that I’ve ever immortalized on video shall earn access to the long lost Ultimate Program.

You’re probably wondering what’s in it…

It’s been a long time since I counted, but I remember the program being somewhere near 200 videos in this thing.  50 of those videos are in the “Free” section of the website already, and some were borrowed for the Head Movement program.  The remainder are exclusively in the Ultimate Program.

The videos are broken into categories:  Jiu Jitsu, Striking, Instant Fight Enders, Ground n’ Pound, Wrestling, and The Clinch… all of the elements that make up a well rounded MMA fighter.

This course is broken down into the techniques that I expect you to learn every single week for 4 months.  Each week is organized to progressively build off of the last.  Your striking will be improved step-by-step… as will your Jiu Jitsu.

Are these videos epically high quality?

No, as stated earlier, we kinda sucked when we were first making videos… our attempts to be funny frequently fell short, but the lessons themselves are good.

Will these stream on every feasible mobile device?

They will work on MOST devices, but I didn’t master the whole streaming thing until years later.  That said, if enough people by the all access pass, I will re-export them for maximum mobile compatibility.

Are these good for all levels of fighting?

Yes, if you are a beginner, y0u will be walked through the fundamentals before we start covering my most badass of set-ups.  For advanced guys, some of these moves will make you crap yourself with excitement.  It can get messy.

This library of lessons is a collection of sheer MMA savagery.  If you learn this stuff, you will be able to win fights from any position, and at any moments notice.  If you want to build your arsenal of fight ending moves to it’s fullest capacity, then this classic program is a must have.

You never know which technique you need to save yourself in a dark alley, so to truly be prepared, you might want to have all of them.

2 reviews for The Ultimate Program